Spelled many ways ‘Khao Soi’, ‘Kao Soy’, ‘Khow Soi’ was originated in Chiang Mai. This amazing noodle soup combines two different noodles, a flat wheat noodle, and a deep-fried crispy noodle. The sauce is a spicy coconut curry traditionally served with a chicken leg. Condiments of a slice of lime, roast chili paste, shallots and pickled cabbage are served on the side.

Having tasted my first bowl and falling in love with it, I went on the hunt to find the best Khao Soi in Chiang Mai.

Here’s my top 10 with a vegetarian bonus at the end.

*Note: All prices were what I paid during my time in 2017. Current prices subject to change along with location and times*

Highly recommended from tourists and locals alike, I was super excited to try her version of Khao Soi.  Fortunately, I was in Chiang Mai for 2 months, because she was closed for three weeks, when I first tried to go. When she opened, I went there three days in a row.  She was definitely worth the wait! 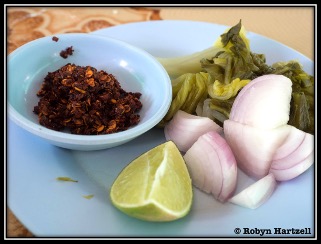 The Space: Outdoor, it looks like it’s right outside of someone’s home. Go through the gate and the food stand is on the left. There are eight tables that each seat 4. Get there early. This place fills up! I got there at 11 am and there were already three tables enjoying Grandma’s dish. By the time I left, every table was filled.

The Menu: Just two dishes here. Khao Soi with either chicken or beef and noodle soup.

The Khao Soi: The presentation is beautiful and is served with a side of pickled cabbage, shallots, lime and a small bowl of chili pepper. The crispy noodles on top are super thin, and the sauce is red, thin and flavorful. The sauce has a little kick to it, but I love my Khao Soy spicy, so I added a little more chili peppers to it. The chicken is chunks of thigh meat, instead of a chicken leg on the bone. The meat was oh so tender and tasted like the had been marinating in the broth overnight. The chicken just melts in your mouth.

Location: The entrance is on the inner side of the north moat between the temples of Wat Monthian and Wat Kuan Kama.

This place came as a suggestion from Tikky’s Café, which I frequented often, but she doesn’t have Khao Soi on the menu. Wanting to hear a local’s take on where to go, she told me to go here, and I’m so glad I did. Right now it’s a toss-up between Grandmom’s and Arak. Both are amazing with melt in your mouth chicken, but both have two distinct flavors. 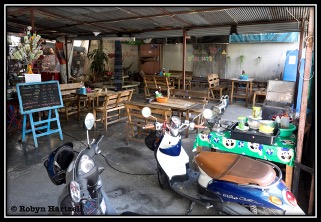 The Space: This is an outdoor area with plenty of seating and fans.

The Menu: There is Khao Soi and other noodle options.

The Khao Soi: The broth is rich and dense. The chick leg is big, and the meat has sucked in all the sauce.  The meat falls off the bone and melts in your mouth. I love spicy food! This bowl had a little kick to it, but honestly, the broth was so good, I just let it be and only put the onions and cabbage in it. Definitely not to be missed!

A favorite among the locals, located in Nimman district down an alley.  Not hard to find though if using google maps and there’s a bright sign outside the restaurant. 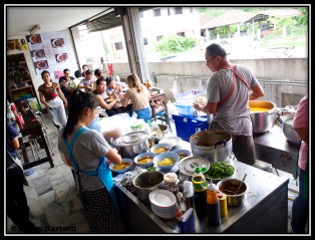 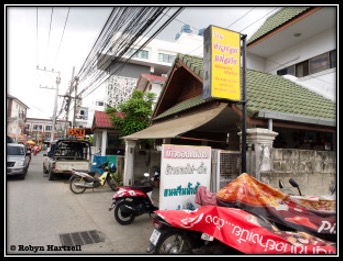 The Space: There are about 16 tables and was mostly locals when I sat down.

The Menu: There are four noodle dishes here. Noodle curry, noodle beef, Khao Soi and rice noodle spicy soup. Most of the locals were getting the Khao Soi.

The Khao Soi: If the place is packed with locals, you know it has to be good. The broth was rich and creamy. The chicken falling off the bone and melting in my mouth. It was also spicy enough that I didn’t add anything extra.  A great choice right outside the moat.

I passed this place a few times before I decided to do a top 10.  The day I stopped to try their Khao Soi it was pouring down rain and they didn’t mind me hanging out until the rain stopped.  The place was packed with locals and a few tourists. All but one or two tables were filled with people enjoying their lunch. 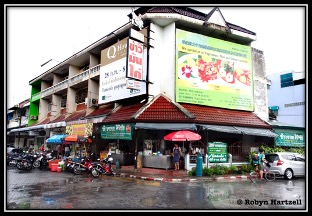 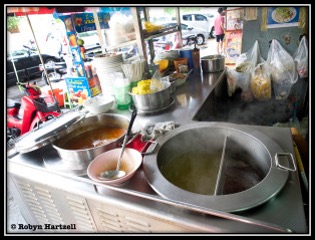 The Space: The covered area is shared between two food stands, one selling Khao Soi and the other serving chicken and rice. There are thirteen tables in the “restaurant”.

The Menu: One dish here Khao Soi; the other food stall serves chicken on rice.  You can get either as they share the same tables.

The Khao Soi: The sauce is thin, not spicy, more of a subtle curry flavor. The chicken leg is a big portion and meat falls off the bone. Normal condiments of pickled cabbage, shallots, lime and chili are served with it.

I love the Sunday walking market!  The place I stayed was only a 10 minute walk and I’d go there every Sunday to get the street food and check out what the vendors were selling that day.  At the end of the market (or beginning, depending where you start) is Phan-On Temple which turns into a food court during the market.  The place is packed with people and you can find almost every kind of street food there.  Right near the entrance

though is the Khao Soi stall. 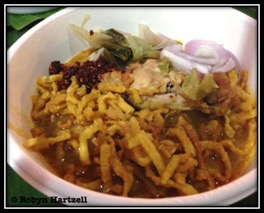 The Space: Food court style with tons of seating.

The Menu: There are easily 20+ food stalls here serving everything from fruit shakes to sushi.  There’s something for everyone here.

The Khao Soi: The bowl is served in a take away container and you season it with all the condiments at the booth.  The broth is flavorful, but the chicken leg is small. This is more like an appetizer portion, which I didn’t mind, because it left room to try more things from the other stalls.

This is the first place I tried Khao Soi and fell in love.  They also have a facebook page HERE. 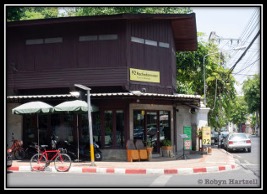 The Space: This is an air-conditioned restaurant with six sit down tables and another table with a couch. There’s free wi-fi for you to use and a book section of both lonely planet guides and fiction books for purchase. The walls have paintings and a general relaxed vibe.

The Khao Soi: The Khao Soi is presented with just the broth, the noodles, and a chicken leg. No condiments are served with it. The sauce is the creamiest of all the Khao Soi’s I’ve tried, and they don’t skimp on putting in the broth, there was easily 2 cups worth in there.  Although this bowl was pretty bare bones, if you’re looking for a bowl of creamy both with Khao Soi flavor, this is the place to get it!

Location: On Rachadamnoen, on the opposite corner of the police station

Located near Thapae Gate, Lamduan Fahrm is considered a 70+ year-old Chiang Mai institution.  Selling Khao Soi in two locations, I went to the one inside the moat.  Sitting between a travel agency and a tattoo parlor is the small restaurant that serves only a few dishes. 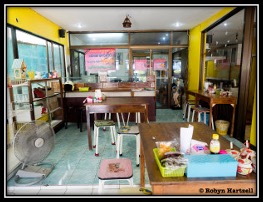 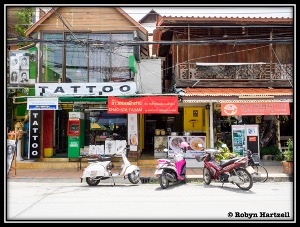 The Space: This place is small with only 3 tables and 2 sit up bars.

The Khao Soi: The dish was served with 3 chicken legs.  The broth is amazing!  So creamy, with full spice flavor, and very rich. The only downside was the meat, although seemed marinated in the broth, doesn’t fall off the bone.

Located on Soi 7 in Nimman, this place has a restaurant area in the back and a stand-alone food cart in the front. 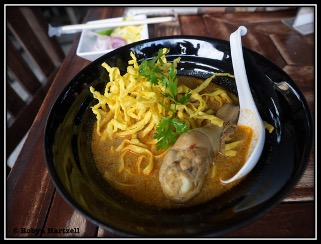 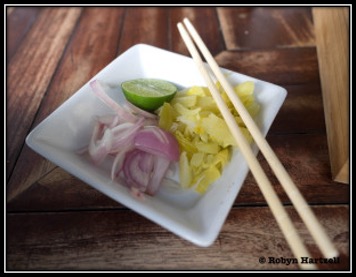 The Space: There’s plenty of seating in the outdoor area and there are some seats indoors too.

The Menu: There are many options on the restaurant menu from thai to western.

The Khao Soi: With ten different Khao Soi’s you can choose from, there will be a Khao Soi to suit everyone. I choose the traditional chicken. First thing I noticed is the chicken leg wasn’t marinated in the sauce as the other Khao Soi’s I have had. I’m guessing this could be because they offer vegetarian options. The leg was cooked on it’s own then served with the broth.  The portion size was big, and the sauce was thin with flavor.  Seems like the broth would pair well with the vegetable version.

In the basement of Tonlamyai Market (which is next to Warot Market), is a food court. Stall F8 serves Khao Soi with all the fixings. 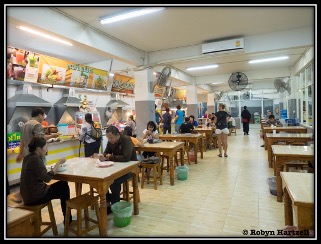 The Space: This food court style area is cooled by fans (although there are four air conditioning units, I don’t think they ever turn them on), and there’s plenty of space to sit.  There are TV’s in the room showing local news and free watercoolers to drink from. At the time I ate I was the only westerner in the place. Nice place to chill after shopping in the busy market.

The Khao Soi: The broth is oily, and the chicken is slices of meat that are not marinaded. There were also two sizes of egg noodles in the broth.  Lots of locals in here, but mostly eating other soup.

Being a former vegan (started eating meat again when I began traveling), I wanted to try a vegetarian version to see if it would compare to the taste of the real deal. 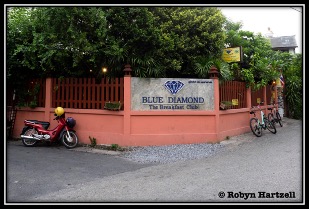 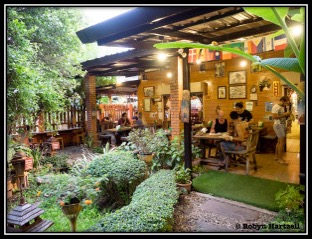 The Space: Many tables in a tranquil setting with indoor and outside seating.  The outside sitting area is filled with greenery a waterfall and koi pond.

The Menu: Full menu with many vegetarian options.

The Khao Soi: Broth was creamy with a mild flavor filled with vegetables (carrots, tofu, green beans, potato, broccoli, cabbage). Not the typical Khao Soi but a great take on it for the vegetarian out there. A big portion of vegetables with a small portion of egg noodles and crispy noodles